What is Nearsighted or what is Myopic?

Myopia (nearsightedness) - what is it?

Myopia is more commonly known as near-sightedness or short-sightedness, myopia is a common eye condition which causes blurred vision at a distance, but clear, more focused vision up close. This is known as a refractive error as it is caused by the improper focusing of light entering the eye.

An eye that functions normally allows light to enter through the pupil, which is then focused by the cornea so that it lands directly on the surface of the retina situated at the back of the eye, these tissues sense light and send visual signals to the brain. If light doesn't focus correctly, the result is a refractive error, such as near-sightedness (myopia), farsightedness, (hyperopia), or astigmatism.

Myopia causes the light to focus just slightly in front of the retina, rather than directly on it.

To fix this refractive error, corrective lenses, such as eye glasses or contact lenses can be used to adjust the angle at which the light is bent, moving the focal point on to the retina. Once properly aligned, vision will appear clear and focused.

There are several factors that can contribute to myopia, the shape of the eye may be too long from front to back, called axial myopia, resulting in in a more egg shaped than sphere shaped eye. The cornea may also be too curved, called refractive myopia, which causes the light to refract inaccurately. These two issues may even work in conjunction with one another to cause blurred vision.

The symptoms of myopia are both simple and common. If objects appear blurry at a distance, but become clearer as they get closer, it is very likely due the effects of myopia. Squinting is another common side affect. While not directly caused by the condition itself, squinting is a subconscious reflex that works by gently squeezing the eye into a shape closer to that of a regular eye. Excessive squinting can then lead to headaches and eye strain.

The most common signs and symptoms of Myopia:

The direct cause of myopia isn’t currently known, however there are several contributing factors that play a role.

Myopia is the most common eye disorder in the world, with current estimates showing between one third and one quarter of all people in the developed world being near-sighted. Interestingly, this is a much greater percentage than in decades past. The greatest increase is seen in school-aged children living in urban areas. The most likely attribution for this change would be the amount of time spent reading, either school books, or digital devices, like computers, tablets, and cell phones. But this alone isn't enough to cause the development of myopia. According to BMC ophthalmology there is a strong link with the lack of time spent outdoors, as well. Not providing the eyes with an opportunity to frequently shift focus from close to far and back again has negative consequences.

Babies can occasionally be born with congenital myopia, but in most cases, the condition becomes apparent during the various periods of rapid growth between the ages of 8 and 12. Generally myopia is diagnosed before the age of 20; however, adult-onset myopia can also occur after this point. Often the degree of myopia increases as the body grows rapidly, then levels off in adulthood.

During the years of rapid growth, frequent changes in prescription eyewear or contact lenses may be needed to maintain clear vision.

The only way to accurately diagnose myopia is with a comprehensive eye exam. This will test many aspect of eye health, including visual acuity, which is the measure of how clear and focused a person’s vision is. Visual acuity is measured in dioptres, a unit that indicated how far from normal any given person's vision is. Near-sighted people have a negative dioptre value (-), where as farsighted people will have a positive value (+).

Once that value has been determined, correction options can be considered.

Myopia is not treated as such, but managed or corrected. The first and most commonly used method of correcting myopia is the use of corrective lenses. This includes both eye glasses and contact lenses. Each have their own strengths and weaknesses, and will require a detailed discussion with an eye care professional to know which option is the best for you. 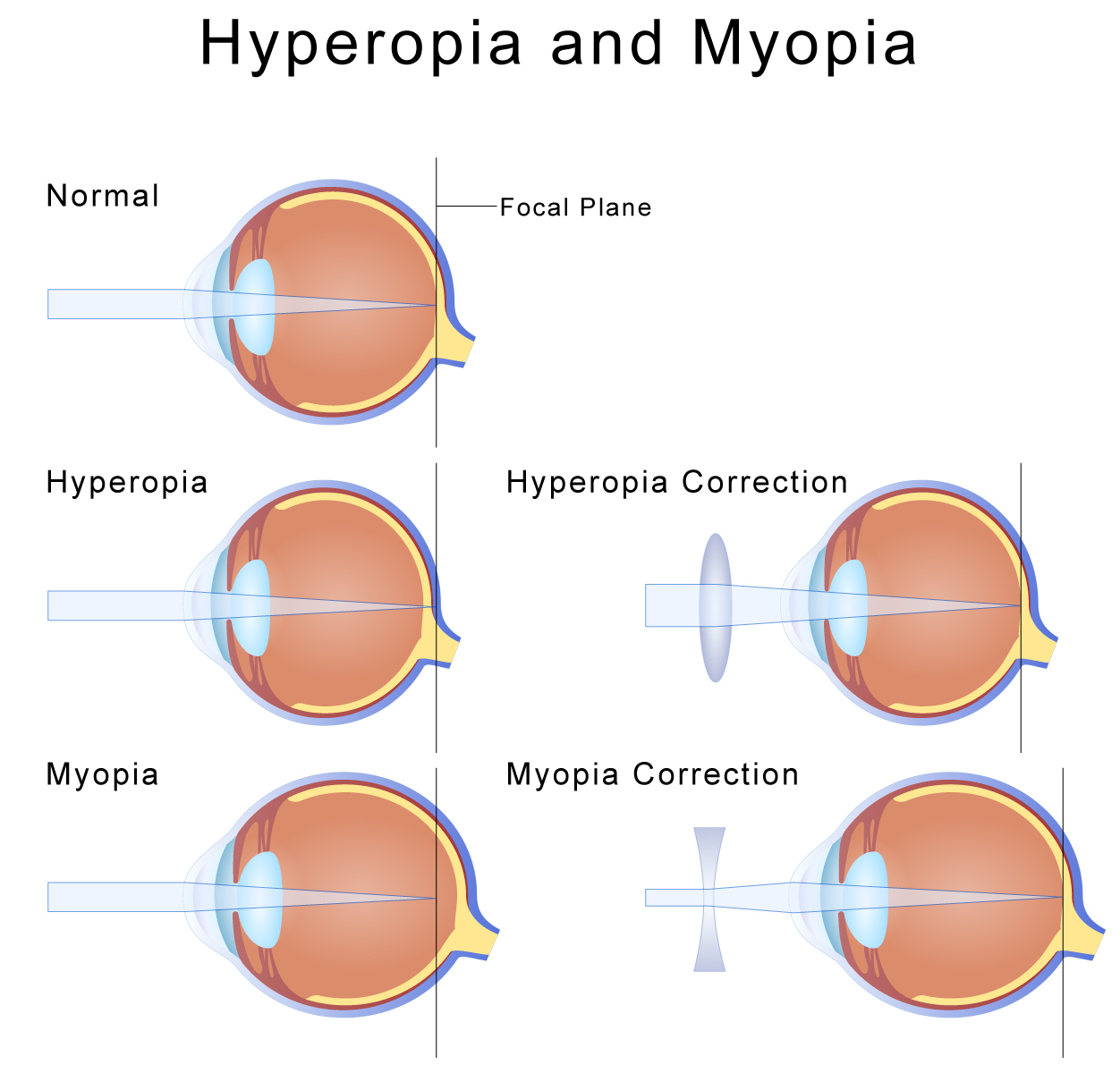 Another available option is refractive surgery, sometimes called laser eye surgery. This surgery uses lasers to reshape the surface of the eye in order for it to then refract light correctly. During the procedure, a small flap of tissue is shaved off of the surface of the eye, and the underlying lens is reshaped, and then recovered with the initial flap. Healing time is usually only several days to a week. A successful refractive surgery often results in no remaining visual acuity issues, meaning eye glasses and contact lenses are not needed.

The downsides of refractive surgery are that its success is dependent on the eye no longer changing shape. For young people with myopia, this may be a problem. As their bodies are still growing and changing, even a tiny shift in their visual acuity would render the benefits of laser eye surgery void, and glasses or contacts would then be needed for clear vision. Waiting several years until their vision has become more stable offers the best chances of success.

However, as time goes on, and the body continues to age, it is likely that other eye-related issues may arise, such as presbyopia. This is similar to farsightedness in symptoms, but not in cause, meaning it can't be treated the same way. Reading glasses may be needed should this become a problem.

There are several sub-forms of myopia, usually defined by their impact on vision. Unlike some forms of mild myopia, which only cause a slight amount of blurry vision, some forms can lead to functional blindness. In general, most people have either “mild myopia” or “moderate myopia”. The other additional types are below:

This is a condition when the eye continues to grow and elongate, resulting in ever decreasing levels of visual clarity. In addition to poor vision, high myopia is also likely to lead to retinal detachment, cataracts, and glaucoma. Compared to the prevalence of standard myopia, this form is incredibly rare, affecting less than one in one thousand people.

Sometimes called pathological or malignant myopia, degenerative myopia is rare and begins in early childhood. Similar to high myopia, the eye will elongate very rapidly in just a few short years, causing steadily decreasing levels of visual acuity. This is a hereditary condition, and is most frequently seen in children whose parent also have the same condition. The progression of degenerative myopia will usually halt in early adulthood, but may progress for many years.

Both of these conditions can be treated with corrective lenses, but only with moderate success. Often the level of visual acuity that can be achieved is still rather low, and may not be clear enough for certain activities, such as driving.

Due to the constant development of these conditions over time, refractive surgery is unfortunately not a viable option for treatments. While clear vision may be achievable at first, the eye's shape will continue to change over time, causing blurred vision once again.

Are Eyelash Extensions Safe? How to use them with contacts?

History of Contact Lenses: When, Who, Where And Why Explained